Bayes’ theorem is one of the most useful applications in statistics. But sometimes it is not always easy to recognize when and how to apply it. I was doing some statistics problems with my Insight cohort when applying conditional probability in one, simpler problem helped me connect it with a slightly harder, baseball-related problem. I’ll talk about the baseball problem in my next post.

Here I’ll talk about how multiple approaches for Bertrand’s box paradox, including with Bayes’ theorem.

I across this in my old textbook. The problem is famous, but I’m apparently not with the in-crowd because I was not aware of it. It’s called Bertrand’s box paradox.

I’m going to show a few different approaches for the problems. One reason for this is that you can see how the answer can be confirmed. (Again, since this problem is well-known, you might find other explanations helpful, including on the problem’s entry in Wikipedia.) But another reason is to point out some flaws in these other approaches, compared to how application of Bayes’ theorem can be robust.

One way to approach this is to “reason” your way through the problem. Let’s say that each of the boxes has two drawers. The problem can be re-framed as, “If you randomly choose a box, and then find a gold coin in one of the drawers, what is the probability that the other will be a gold coin?” You can eliminate box B (S,S). Many believe that since the coin must come from either box A or box C, there is a 50% chance that the gold coin must come from box A. However, this is not the correct answer (and also why it’s referred to as a paradox). The right approach would be to consider that the selected gold coin is one of the following three gold coins:

Therefore, it’s a 2/3 probability that it comes from box A. While this approach may help you get an answer quickly, it relies on making the proper assumptions. But the correct suppositions are not always obvious without regular experience doing problems like this. Accordingly, the “reasoning” method must be applied with caution. 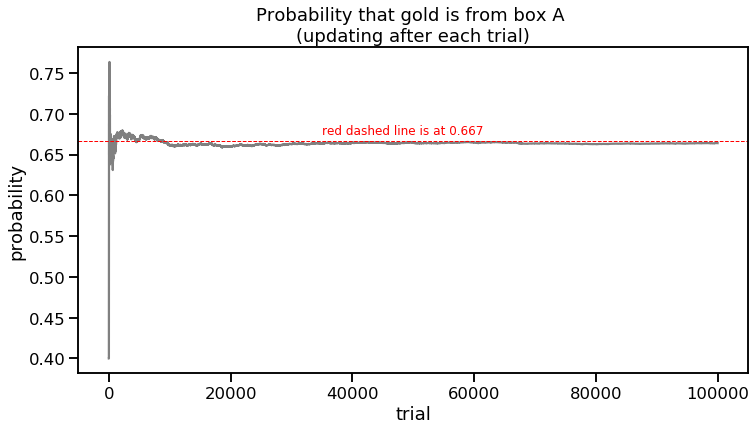 One advantage of the simulation approach is that not many assumptions have to be made. One can simply use code to carry out the parameters of the problem repeatedly. However, as you can see, even after 100,000 trials, we don’t get 2/3 exactly. Bayes to the rescue!

$\text{P}(A|B)$ = The probability of event A occurring given that B is true. The left side of the equation is what we are trying to find.

The entire right side of the equation is information that we are given (although we have to make sure we put in the right numbers).

Another way of stating the problem is asking “What is the probability that the box chosen is A, given that you have also selected a gold coin?” Substituting the words in to Bayes’ theorem would give us something like this:

The entire right side of the equation is information that we are given. The parameters in the numerator are the easiest for which we can plug in numbers.

Awesome. This is how we apply Bayesian statistics in this problem. Let’s level up and try a problem that is a little more complicated. See you in the next post!