I meant to post this some time ago, but I have been busy. But with the baseball example I am using, it is only fitting that I post this now, just after this year’s strange timing of the start of Major League Baseball’s season. (My team had a nice opening day win!)

In my last post, I applied Bayes’ theorem towards revealing a hypothetical player’s probability distribution for their hit rate after observing their performance for a given time. Essentially, we found the player’s posterior distribution. However, because the prior was a Bernoulli distribution, so was the resulting posterior. This is not realistic. We would instead expect the distribution to appear Gaussian. (I emphasize “appear” for reasons you will see down below.) A Bernoulli distribution also does not really allow us to apply the concept of a credible interval. Going down this Bayesian rabbit hole, I became more interested in some of the concepts and went back through some old notes. I examine this question in a few posts. Here, let’s focus on using a different, more realistic prior!

First, a few shout-outs to some sources I referenced when writing this post.

I won’t restate the whole problem, but you can find it in the previous post if you need a reminder.

What if we weren’t asking for a single probability if Aguila was in the 10% hit rate group versus the 25% hit group? What if we asked where Aguila’s batting average (hitting rate) would be across a range of talent levels? Let’s take these steps in a couple of iterations. First, let’s take the original Bernoulli distribution example and show how the prior distribution gets updated with data to produce the posterior distribution. I show this differently than I did in the last post.

Using a Bernoulli distribution as the prior 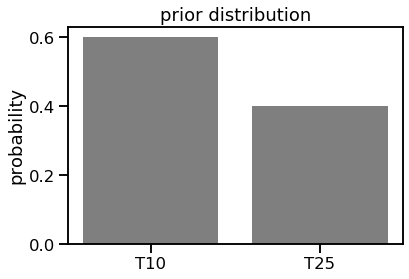 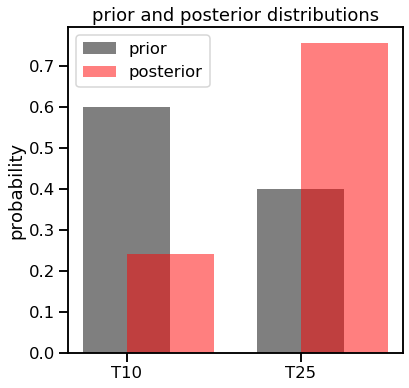 Note how even though we calculated the posterior values for both, we could have easily just taken 1 - the probability of the T25 group. Now let’s apply the same process but using a different, more realistic prior distribution.

Using a more realistic prior: the beta distribution

I mentioned above how we’d expect the prior and resulting distributions to appear Gaussian. I started with a normal distribution as my prior but realized that this would not work. That is because the Gaussian is not “conjugate” to the binomial (the distribution of the data), meaning they’re not in the same family. The math gets wonky if we try to multiply the data (the likelihood function) with a prior that is not in the same family. Here is nice diagram of related distributions. (We’ll actually carry out this math in a later post.)

To generate a prior, I need to set the values of $\alpha$ and $\beta$ but what should I choose? I decided to use some constraints of the original problem. Let’s say that the true talent rates of 10% and 25% are not the only values we would consider, but instead we can say that they are the bounds of the prior and posterior distributions. This makes the mean straightforward to identify: we just take the midpoint between these two values. 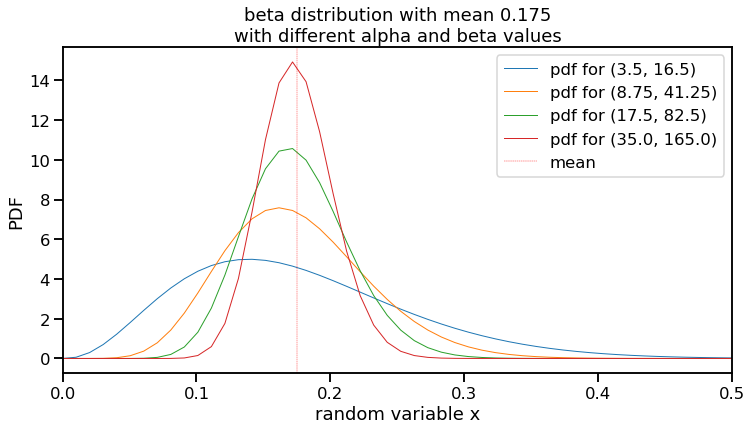 This visualization highlights a few things to note about the beta distribution examples.

Therefore, we can consider where we want the majority of the prior distribution values to lie when setting $\alpha$ and $\beta$. I stated above that we would like the lower and upper bounds of our random variable x to be 0.10 and 0.25. We can define these bounds to contain the central 95% of the probability distribution and choose $\alpha$ and $\beta$ that way (along with the mean of 0.175 as we figured above). Therefore, we can get the values of the random variable x for the lower bound at 0.025 and the upper bound at 0.975 using the quantile function by trying different $\alpha$ and $\beta$ values. This is called the prior predictive interval. We are predicting where we think the new data would lie. 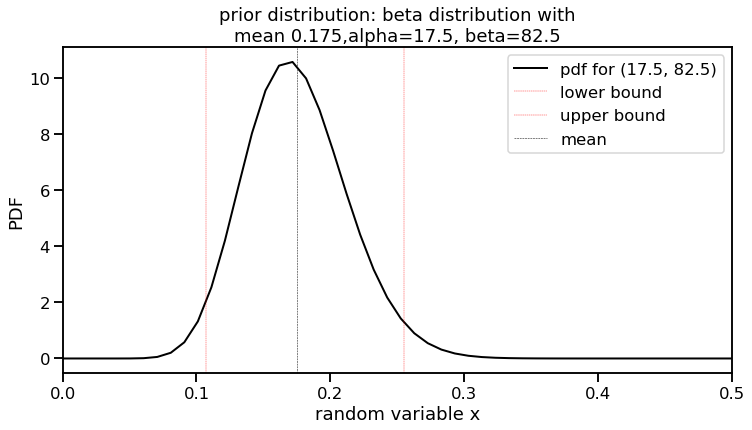 Awesome. We now have a more realistic prior. The interval between the red lines (our lower and upper bounds) indicate our 95% predictive interval. How will this impact our posterior once we add in the data? That will be in the next post. See you there!